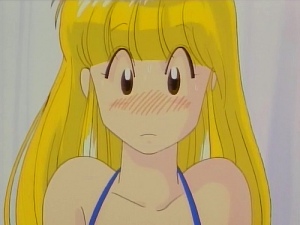 Comedy is always tough because people’s sense of humour varies so wildly and tastes change so quickly. Parody is even tougher because that which is being parodied is often a hot topic of the moment or is just generally forgotten over time. Luckily Assemble Insert manages to avoid these pitfalls and remains an incredibly funny show to this day. A lot of the credit for this has to go to Masami Yuuki who wrote the original manga who has proved to be a solid action-comedy writer having penned both Birdy the Mighty and the Patlabor manga. Given that director Ai Tomobuki’s only other directorial credit of real worth is another Masami Yuuki adaptation I feel like we can safely say that those two are a good match together.

Assemble Insert’s story is quite familiar and yet utterly wacky. Demon Seed is a criminal organisation that goes around stealing stuff with the help of some power-suits. To fight them the government has set up a dedicated department…that is woefully underfunded 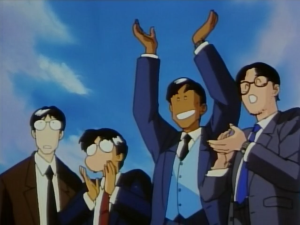 and has only 5 members. Their very forlorn boss has decided the best way to beat Demon Seed is to hold open auditions to find a hero that will fight in the special made power-suit made by a mad scientist, because of course there is a mad scientist. These auditions don’t exactly go well with there being a variety of totally lame acts. They think all is lost until the final person comes on stage: Maron Namikaze. This young girl (a high schooler according to the dub and sub although apparently actually 13 in the Japanese) is a bit of a nervous wreck but impresses everyone with her super strength, which she demonstrates by bending the metal microphone stand around like rubber while she nervously plays with it. Over the two episodes we see her fight Demon Seed on two occasions and her blooming idol career, as the department find any way they can to get more money for their budget.

The story is obviously not all that important, but it is more than adequate to carry the characters and the comedy forward. I really liked how they managed to weave together the narrative and the comedy together to actually create a surprisingly heartfelt moment towards the end of episode 2 as the department members all band together to help Maron in her idol career. The characters themselves aren’t all that interesting with most of the department members being interchangeable apart from the boss and Maron. The boss was really fun to watch as he fit into a personal favourite archetype of mine: the tired, overworked, and cynical older worker who still has a heart of gold at the end of the day. It helps that he was played by Norio Wakamoto and of the talent that he brings. The villain wasn’t all that interesting and was really more of a board for the other characters and jokes to bounce off of.

All of the above is great and all but this is a comedy anime and so the comedy needs to actually be good. Thankfully I can confirm this! The show smartly doesn’t commit wholesale to one type of comedy; there are moments of parody, moments of slapstick, moments of wordplay, etc. By having all of these different types of humour in there meant that the jokes never got stale and if one type wasn’t landing for me it would only be a few seconds before I got to enjoy something totally different. My favourite part of the comedy was how stupid some of it was, in a totally on purpose way. For example, at the beginning one of the boys walks into the office saying the bank has recordings of a recent Demon Seed heist. He then proceeds to insert the VHS and up pops a music video for an idol. The boss is very confused as to what is going on until it is explained that the bank hasn’t sent over the tape yet and that they had just rented this tape from the video store downstairs. This joke is super lame but honestly it is very funny in how it is executed. Quite a lot of the comedy is like this but there are also just great parody moments, such as when one of the characters points out that it is about time for an advert break which leads to a little segment involving a piss take of both product placement and adverts. It is just a really funny show that has a bit of something for everything.

On the visual front things aren’t quite as good. The animation certainly isn’t bad but it is pretty average by OAV standards, which meant the fight scenes were fairly uninspired and uninteresting. The best animation in the entire show is probably in the perky pop number, because of course they just stick a song in the middle of an episode! Despite the limits of the animation the use of movement and the shot composition was actually pretty well done and really helped sell some of the jokes. The art design itself had some really fun little features that caught my eye and kept me engaged. The one that really got me was how Demon Seed seems to have been inspired by Go Nagai and Mitsuteru Yokoyama villains. It was a really cool design choice that obviously appealed to me given my love for both Go Nagai and Giant Robo.. On the audio side of things I have already mentioned Norio Wakamoto but honestly the entire cast was really solidand all managed to sell their jokes well. This is the sort of production where you can here the voice actors having fun in their roles, something that always makes things better. Sadly the dub is terrible, which absolutely kills the jokes. As such just watch the sub, you’ll actually enjoy it then!

Overall this is just a really fun show. It isn’t a blow your socks off and have a moment of religious ecstasy type deal but rather it is comfort food. A bit like Shinesman this is a show for when you’re feeling a bit down, maybe you’re sick or the weather is miserable. Stick this on and it will perk you right up; you’ll giggle, chuckle, and end the show with a great big grin on your face.