Tatsunoko is one of the oldest names in anime, having been around since the early days. For their 40th anniversary they decided to make Karas. This show is basically a tokusatsu style show, much like Ultraman or Kamen Rider, but gorgeously animated. The show was directed by Keiichi Satou; who is known for directing Tiger & Bunny, Asura, Rage of Bahamut, and Inayushiki. The series was composed and scripted by Shin Yoshida, who is most well known for doing series composition for a ton of Yu Gi Oh.

As I mentioned earlier, Karas is essentially a show in the tokusatsu style. This boils down to bad guy with goons attacks a city/hero repeatedly until he unveils his ultimate plan to destroy/take over the world. The hero is a suit wearing character who has a ton of super powers and who always wins. This is the basic formula but then shows like to build a whole load of bullshit around it that makes actually explaining the show very difficult; the best example of this is Hokuto no Ken which is really just Kenshiro poking bad guys to death in the desert but has the destiny of the two school of the martial arts heaped on top as well as various other bullshit. The same goes for Karas. If you don’t know this going in, like I didn’t, then the first 3 or so episodes will leave you utterly confused as to what is happening. Is the dude in the beanie the main character or is it this dude in the toku style suit or is it the policeman? Are they human? What are their goals Are they good guys or bad guys? What is even happening? These are all questions you’ll ask but trust me they do explain thing and you soon realise it doesn’t really matter because it is about a man in a suit beating up another man in a suit. I mentioned policemen and that is because they are the grounding in this super natural story. They are a pair of cops who are assigned to look into the supernatural, especially a set of disturbing murders. Through them we kinda learn about the yokai world and they keep things grounded for the viewer. Unlike the titular Karas who we don’t really learn anything about till a flash back later on. So yeah, the characters and the story are a bit of a mess. They are really just there to provide flavour to the action and to give a vague reason for dudes to fight each other.

The show is really about the action and this is 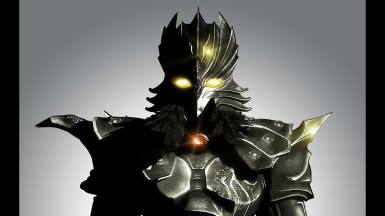 where it shines. It heavily uses CG but it doesn’t cut frames and the CG is well done so the whole effect works. It helps that they do some cool things with the fights, such as stopping time and turning into planes. The show opens with to dudes fighting their way through a city stopping time frequently and switching back and forth between shooting each other as jets and fighting each other with swords. But on the visual front it isn’t just the action scenes that shine. During the quieter moments is actually when it really impressed me as there was constant, detailed, and smooth movement. This is where OAVs tend to shine over TV anime but Karas was really a great example. The music is top tier superhero stuff that helped establish the tone and get you hyped for the awesome fight scenes. This one also has a good sub and dub on it, I’d favour the dub if only so you can keep up with the nuts action on screen.

Karas is fun dumb action. Like so many of these types of shows it seems far more complicated than it actually is but if you push through it does explain itself, even though it turns out to be a fairly generic plot. I wish the villain were fleshed out more as it is an interesting idea that other shows have also tried to do, but sadly he is left a bit bland. Overall, it has cool fights, great music, and some likeable characters. I’d say give it a go at least.