I really love the Macross franchise; Do You Remember Love? is an all time classic, Plus remains a steady presence in my persona top five, and Frontier is just a blast. With that out of the way I can confidently say that Zero is kind of terrible. The main issue is that the characters and story collapse into a bunch of fairly boring and impenetrable mystic nonsense, which is sadly a bit of a trend for director and Macross creator Shoji Kawamori from the late-90s onwards. 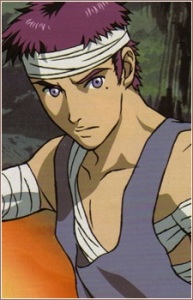 The story starts of simply enough with a war raging between UN and anti-UN forces due to the UN trying to form a one world government in response to the crash landing of what would later become the SDF Macross. Our hero, Shin, is a UN pilot who crash lands on the Polynesian island of Mayan. He wakes up to find the islanders shun technology and want him gone as soon as possible, or rather their priestess does as everyone else seems pretty chill about technology and Shin. However, soon a battle rages over Mayan as the UN and Anti-UN scramble to find ancient artefacts dotted around the area that may explain the very origin of the human species. While all this is going on Shin is having a little romance with the priestess, Sara, who warns of ancient prophecies about the Birdman and the cataclysm his awakening will bring. All of that is easy to understand and isn’t all that complicated, the problem is the details.

First of all, the ending is insane. A plane turns into a magic space bird, the Birdman hyper jumps away with no explanation, people can now send telepathic holograms, nukes are being launched left right and centre, and submarines start flying. I like space magic but this was step to far even for me. It also all comes on very quickly, there is the odd bit of space magic earlier on in the series but then the final episode takes everything to 11 in roughly 3 seconds flat. The result is quite jarring and it pulls the focus away from characters who were already fairly uninteresting. 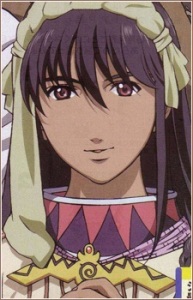 Speaking of characters, dear God this cast is dull. Shin is a dude who flies planes, apart from that I really can’t tell you anything more. He is just so lacking in personality that it hurts. They do try a bit in the first episode, showing how he pushes everything to the limit, but that character thread is quickly dropped. Sara is actually alright as her beliefs and religious duties give her some quite interesting moments, however her ‘romance’ with Shin is super weird as she goes from hating him to loving him for seemingly no apparent reason (they didn’t even have a knife fight!). Sara’s younger sister Mao is a fairly spunky young lass but he doesn’t really have all that much to do in the story, honestly you could easily remove her entirely, and she has some quite creepy romantic moments with Shin, creepy because she looks about 14. There is a scientist lady whose entire character is “I am an uppity science person who can’t understand that maybe people have customs they don’t want you to fuck with”. Oh and she has a little romance with Roy Focker, yes Roy Focker is a supporting character here as Shin’s mentor, which is kind of weird given that Zero is set only shortly before SDF Macross where he is in a fully committed relationship with Claudia and it is inferred that she was the only woman he had ever romanced seriously. It is just a bizarre inclusion that added nothing to the show and confused things a little. However, Kawamori has said that every Macross show/film is actually just an in-universe TV/film version of events and so we should expect some weird dramatization and for the timeline not to match up perfectly. Macross is weird! Finally, the villains. The Anti-UN forces are weird because they don’t ever really do anything all that bad and so I was left scratching my head as to why they were being treated in such a villainous manner. Right at the end one guy admits that he is trying to end the human race but none of the others really seem to be in on this plan.

Now that we’ve gone through some of the negatives lets look at some positives! The action was pretty good with move to CG mecha allowing for far more dynamic fights, which really became quite impressive by the end. The very Evangelion inspired (and don’t you dare tell me it wasn’t!) final fight was a particular highlight, especially with the music. Sadly a lot show did look pretty dodgy at the beginning simply because it suffered from being early digipaint so layers wouldn’t mesh well with each other, things moved awkwardly, and panning always looked off. These visual issues did improve over the course of the show though and they made the smart move to stop using large amounts of 2D-CG combo shots which was another issue in the early going. But enough negatives, we want some positives! Well, the mechanical designs are great, which is to be expected given that this is a Kawamori joint and this was 20th anniversary project. The 2D animation was similarly fantastic with some great work done on the effects side of things, in particular they really nailed the blast effects from engines and explosions. While the music was a step down for the franchise it was still a strong outing with some nice battle tracks. Finally, they had some great thematic moments mid-way through about the role of civilians and non-aligned countries during conflicts. They were only little moments but they really made a real impact, I kind of wish the whole show were about that rather than the anti-technology stuff.

In the end Zero is a bit of mess. It had some good ideas, some decent music, and some solid animation but its rambling nature and weird mystic moments derailed it seriously. It doesn’t help that most of the characters were quite dull or that it suffered from many of the problems of early digipaint. To be honest, it generally feels a bit superfluous. It doesn’t really add anything to the franchise in terms of narrative or themes. The biggest impact to the franchise it has had was when they made a movie of it in Macross Frontier. You could quite happily never see Zero and still get maximum enjoyment from the Macross franchise, and that is exactly what I’d advise you do.